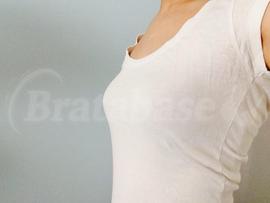 I have shallow breasts (28"underbust, 31"bust) and got measured at a 28DD. I tried a 30D just in case a 28 band was too tight. The 30 band on this one is comfortable on me though some may say it's not tight enough. The cup fitting was tricky for me. When bending over or standing up with perfect posture, there are no visible gaps at the top of the cups. However, if I move my arms in front of my chest gaps will appear so I will be returning this bra and trying a 30C. I have rather wide roots as well and this bra addressed that issue very well. The underwire reached up a little further than I'm used to be it wasn't bothersome. The bra itself is made of very comfy fabric. The "Natural" color is a medium tan color and passes the white t-shirt test for me. It is a passable match for my asian skin color. One disappointing aspect of this bra is that straps aren't fully adjustable which stinks for us short gals. I think if the straps came up a bit further the gapping wouldn't have been as visible. The padding is about 1/8" - similar to Victoria Secret Body Wireless bras. The bow and metal coin are sewn on so if you don't like them a simple snip will take it off!

*Edited to add that I learned that gapping in some positions is considered normal for molded cup bras...So I might keep this for now and try a 30C for comparison.