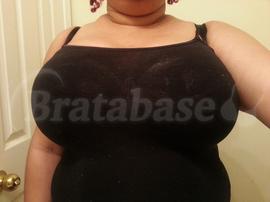 Such a beautiful bra! I haven't worn foam lined cups in ages so it definitely takes some getting used to again!

The band is firm, but I've read EM bras usually have firm bands so that's to be expected I guess. It gives a really nice, round shape. I've tried many tops over it and the decorative lace trim on the top of the cups didn't show through any of them, so that's a plus! The straps are fully adjustable and it has narrow wires that actually encircle my breast roots.

Some of the cons I came across when first wearing it for an entire day (without an extender) were:
The band would start out firm but fine. But as the day progressed it would get almost painfully tight at the bottom, digging in at the sides in particular.
Like all my other bras, the bottom of the gore/band digs into my stomach, more-so if I've had a large meal. I'm pretty much used to this though since I have a stomach shelf.
The pattern and/or seams on the bra may show through on tighter, very thin material tops. The spaghetti strap top I wear in my pictures shows this. I also wore a regular plain shirt over this bra and didn't really see seams, so it looks like it doesn't show under normal and thicker materials. I actually don't mind bra seams showing at all, but I know some women might not like it.
I quadboob just ever so slightly on my larger breast, but it isn't visible under clothing.

Even though some of those cons look like deal-breakers, I decided to give this bra another try with an extender and it pretty much cleared up all the cons I was having save for the gore/band digging into my stomach. But all my bras do this to me so it isn't so much a problem with the bra as it is with my anatomy.

Overall, I really like this bra and hopefully, with time, I can get the band to stretch some more so I won't have to use an extender!

Strap separation:
Are too far apart
Top of the cup:
Cuts into breast tissue (quad boob effect)
Band fit:
I can fasten it, but it feels too tight