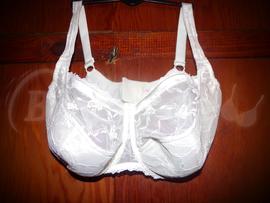 I can see why this is called a luxury brand,what gorgeous fabric! Sizing seems pretty true for a Polish bra,the band was a little snug for me,so perhaps using an extender,but only one hook would have been best as I think I need a band around 38.5-39 inches depending on the day.Band was nice and firm,I love whatever fabric they used for it.Cups seemed similar size to an Ewa Michalak CHP 38GG or PL 38H.
The wires were a wee bit wider than perhaps what I needed,but only by a tiny bit,they were still narrow and I don't have discomfort from wider wires.Other reviews of the H shape have said that the wires were a little wider than the others and I can confirm that.They were a little higher,too,making it great for side fluff.

With all of those good things,this bra doesn't seem to be working,and I think it's due to the cut,making it the wrong shape for me.Could also be partly cause of being 3/4 padded and 1/4 not,I thought this would help it fit better,but I think with my short boobs,my apex and the apex of this bra is not matching up.I think it would be better for someone with an differently placed apex,or someone who is fuller on bottom.While I'm somewhat full on bottom boob wise,I do have some tissue higher up which I need enough space for,especially depending on where seams or edge of cup hits at.The ribbon at the top does cause an issue with that.The straps are a little wide set for me,but I struggle with that in almost all bras.I am wondering if the straps were more where I would like them to be if that would help a bit.I am going to try it on again and see if there's any way to alter it,but I would rather not take scissors to such a nice bra unless I really know what I'm doing.So I am likely to sell it.

Despite it not working out,I'm very glad to have gotten to try an Avocado bra,and am thinking one in a K or A cut could work for me,can't wait to try one of those (boo long shipping times).I may even retry an H cut later on,but in a full unlined style.