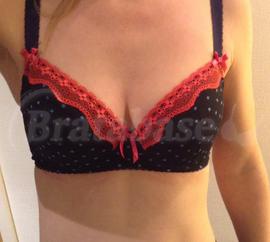 I'm pretty much in love with Comexim bras at the moment. I bought this one after trying the Irish Coffee in a 60E and finding it slightly too small, so got this in a 60F. It's a really cute and fun bra, flirty where the Irish Coffee is sexy. The shape is pretty similar to the Irish Coffee: fairly open on top, narrowish wires (though noticeably wider than the 60E), with a medium amount of projection. The band is a normal 28 - I wouldn't recommend that anyone with similar measurements to me (27" snug) should size up in the band. I don't get spectacular cleavage in this bra, or in Comexims in general, but I do get a very nice shape I can only describe as "perky". They're the type of bras I can wear to work and still feel I have boobs, without being all "Hey! Would you look at my boobs, they're right here!!!"

I also ordered the matching undies, and they're just as cute as the bra. The back is frilly rather than elasticated, which means it doesn't cut in at all (I was a bit worried about that because they're shorts style undies, which usually aren't all that flattering on me). I'm definitely ordering the matching set in Comexim from now on, for which my bank balance isn't thanking me but whatever bank balance, like I care.