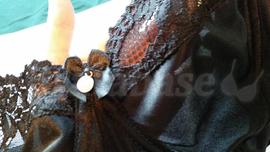 I am a fairly even and very projected breast shape. I have average-to-narrow roots with a slight omega shape. My best fitting bra is a Cleo Lily in 28GG, though I think a 30G would be more comfortable in terms of band length.

This bra is good for someone with average-narrow width, a projected shape, and some upper fullness.

I think this bra might be the death of my bank account - I like it a lot! It's a very, very tiny bit wide for me, so I'm doubly interested in other EM bras that have her normal width. This is the first EM bra I've tried. I don't necessarily feel like I get the cakes-on-a-plate look she's famous for, however, but then this is one of her balconette bras rather than a plunge or half-cup.

The band is nice and snug, comfortable without being tight or constricting. Do note that I tend to prefer a very snug band, however, so YMMV. I am especially pleased by the three hooks, rather than just two, in the band.

The bra has nice, stretchy lace on top - I suspect it could accommodate for slightly more wiggle-room where upper fullness is concerned than some bras. The cup fabric itself is silky and smooth to the touch - it's very comfortable and doesn't chafe even a little. The peal and bow detail in the center adds a little extra elegance to the classic design. I would also go so far as to say the pictures uploaded don't really do it justice - I was a little worried about it feeling "plain" when I purchased it from another bratabase user, but I don't feel that way at all now that it's in my possession. It has a "less is more" sort of feel to the design.