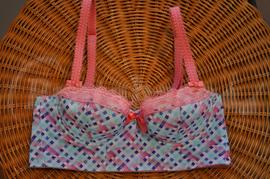 This is my first experience with Freya.

Initial impression after wearing it briefly: suitable for wide and shallow breasts. Cups seem to run small but the band seems a bit loose 28 (but my UB is 26 so my estimation might be off). Straps are surprisingly not too wide. Gore a bit wide for my close-set breasts but doesn't hurt because of looseness. I get a smidge of quadboob on the inside of the cup and very slight gaping near the straps. The wires are average/narrow. The foam lining structures lightly but allows for the cup to fit to the breast. The band have a tendency to roll up especially due to the looseness of the band.

What I didn't like: two columns of hooks. Why!? The band is already loose and once the band stretches out, it's not going to work without some mods. Also, the cups' foam lining is not covered so I don't know how comfortable it is during warmer weather.

Edit: After wearing this bra consistently, it does seem to run small. The bra keeps pulling to my larger side. The gore doesn't tack very well even though I've altered the gore to be narrower. I now mainly keep it for wearing while lounging as even though it doesn't fit that well, the looseness of the band keeps it quite comfortable.

Cups separation:
Too separate for my boobs
Cup's width:
There is empty fabric on the sides (Cup too wide)