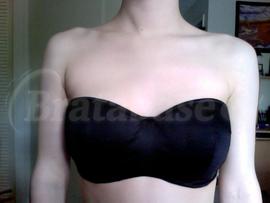 I wear this bra *almost* every single day. I've had it for about a year and am now wearing it on its tightest hooks, but when I first received it I was on the loosest hooks for a good while. I LOVE this bra! The gore tacks and it is so comfortable. It's great for wearing not only under strapless tops, but under spaghetti straps or tanks as well, as it doesn't have that weird extra armpit coverage some more full-coverage strap bras do. The only thing about this bra is that when wearing it all day, I do have to sometimes adjust, ie grab the bottom of the bra and sort of "wiggle" it back up higher to where it should really be sitting. However, this isn't really a big deal as it doesn't hurt to wear for any length of time like some bras I've had did.

Edits: I forgot to mention in my original review that the gore does not tack fully at the bottom, but that's really not a problem that affects the fit at all. There is also a little bit of 'orange in a glass' action going on, but this doesn't affect the fit either really, and it's definitely not significant enough for me not to wear the bra. Despite others saying that a lot of Masquerade bras are shallow on the bottom (generally terrible for me), this one seems to be less so. I'm a FOB girl with pretty even and front projection, and I love that this bra, even after a year, covers and holds in all of my tissue and gives a super-round, projected look https://d28qt14g3opchh.cloudfront.net/smileys/icon_smile.gif" alt=":)" />