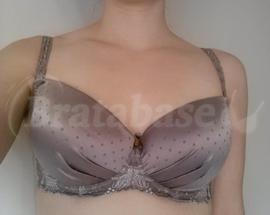 Wow! I literally jumped up and down when I first put this bra on! (It supported me well, but not as well as Panache Sport, haha)

It is a lovely warm-toned charcoal, one of the best colors for my peachy-pale skin. I wouldn't describe it as cocoa though, like Brastop and Kris Line do, it's much too silvery for that. It has a dark gold fabric rose on the gore on top of a silver bow, and some of the embroidery on the lace is gold as well. The cup pleats are interesting, I'll report back if they show through shirts or not, but they don't seem to. It has non-removable push up padding in the bottom of the cups that gives my FoB boobs a nice shape. When you squeeze it between your fingers, it makes a noise like packing peanuts, but when worn it seems to stay silent.

As far as fit, it seems like a pretty true 30FF, and everything feels great except the darn wide-set straps, which are VERY short. I have them adjusted as long as they'll go, and I'm 5'5" with a high root. They measure 13", compared to my 30F Deco's 17". They have a fully-adjustable design, but have a lace overlay in the front. I don't think it would be a problem because of their short length though. They are detachable, but too short to use crossback for me. I may just get replacement ones, I've missed crossback ever since I stopped wearing 34B's.

The band has 4x2 hooks and is very very very stretchy, 23" at rest to 30" stretched, and you could probably pull it to 31" if you tried. This makes it feel less supportive than my Decos which have a 26" unstretched measurement, but sometimes if my skin is feeling sensitive that's what I want. It doesn't give that tight pinchy feeling along the sides of my rib flare like the Decos do. It has side support stays that don't poke.

The gore is half an inch higher than the Decos, but it's so narrow (Overlapping wire channels! Hooray!) that I don't notice it at all.

The cups themselves have a short height and don't cover much of my breast, which I prefer greatly, but some might find them not supportive.