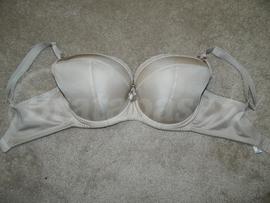 So again, I was apprehensive about this bra after ordering it. Based on measurements, advice from other Bratabasers, and advice from Wellfitting, this bra should not have fit me. But it does. The cup is equivalent to my other 30GGs that I set it against, which is why that works for me. The band? Well, the band is odd. Technically, it's a 32 (because it's 70), but it doesn't stretch far enough for that. Instead, it actually only stretches to around 28.75"-29" (I can make it stretch to 29" without hurting it). I am actually closer to a 29" band, which obviously doesn't exist. My 28GG Deco is just a bit too small in the band, and it actually turns out that the 32G Deco I bought and had altered (actually ON my body) is now a 29" as well. Cool.

Thankfully, it is pretty much a perfect fit, which means I'm confused about sizing yet again. Ah well. I love this bra, even though it is a basic. It gives great cleavage (parallel to my ill-fitting Deco, but better looking since it fits) and is quite comfy. And for being a basic bra with a basic 'nude/beige' color, I think it's adorable. Love the little bow detail in the middle.

Again, I think I'll be able to move the band tighter not too long from now, which is normal as I'm losing weight again (though if I could spot lose everywhere but my boobs/band, that would be awesome since 28s are much harder to come by). I'm very happy with my order and this bra!

Strap separation:
Not a problem
Band fit:
The band is definitely too big