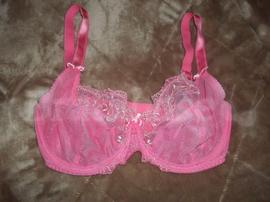 i got this bra heavily worn from a swap group, since ive been between a 34 and 32 band and wanted to try Curvy Kate for cheap. as such, there is some wear on this bra- discoloration under the arms, and the band is probably a bit stretched. it is definitely still in wearable shape. i did still enter the band measurements, because looking at the chart, it seems the other models in this size can also go to 32, so this may not be as worn as i had thought.

unfortunately, this bra is a no for me. the wires feel too wide- slightly in measurement, but more so in the shape. its hard to explain, but its like instead of "u" type shape, they make a more gradual bowl-shaped curve. there is about 3/4 and inch of empty wire channel at the underarm side, and if you measure to the end of that, the cups go 6 inches wide. but since the official measurement isn't supposed to include empty channel, it's been entered as the 5.75 inches from wire to wire.

the cups are also wrong on me- i think they're actually too small, as im getting the "downward 7"sad shape. i will say though, the top doesn't cut in on my Tall/Large Shallow shape, so there's a plus! i was mostly getting this bra to see about shape anyhow, so im glad to confirm a bra that will have loose enough top sections to accommodate me. there isnt any quadboobing because of the looser top, but the cups definitely feel strained, so i marked in fit that the cups were too small.

i love that the band has 3 hooks! it does feel snug on me, but i was expecting that, give its a stretched 32 and im bouncing between 34 and 32 these days. despite the amount of wear, the hooks and eyes all look perfect, so im confident the quality is good in these bras.

looks-wise, this is also quite pretty, with bows on the strap/cup connection and gore, floral and eyelet lace at the cup top and at the gore, and embroidered mesh for the rest of the cup. i can see how it may be too girly for some tastes, but in general i like the looks of CK, and i think this is one of those bras that looks better in person.

hopefully i can pass this along to someone else!

Strap separation:
Not a problem
Top of the cup:
Cuts into breast tissue (quad boob effect)
Cup's width:
There is empty fabric on the sides (Cup too wide)