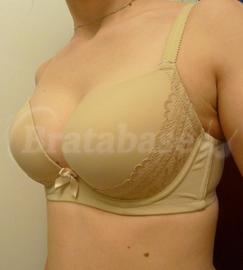 Edit a few weeks and wears later: I like the feel of this bra, but the cups definitely begin to gape along the top edge they push away from the breasts significantly, especially if I bring my shoulders inward. I feel like maybe I need a cup size smaller, and I'll probably try that. Of course, it would also help if I could get a 28 band. When I s&s right after putting it on, it fits well, but as the day goes on it's like I sink out of it and the cups become pretty empty at the top, and since there's so much cup it feels uncomfortable as it moves around. Since they're molded, it's not noticeable to other people.

Original review: I'm pleasantly surprised by the shape this bra gives me. Very lifted and pushed together - I actually have cleavage (right after a nice swoop in anyway). The lace is a nice touch, being on the outer edge means it won't show through thin tops at all. The contour cups are quite thick and fairly stiff, so they push out farther than my breasts along the top edge, especially if I slouch. I suppose the cups are a bit too full coverage for me since they have a rounded top edge - I tried it on with a v-neck top and it was a struggle to keep them from showing in the neckline - I'm very petite though!
The band feels comfortable on the loosest hook but it can stretch out quite a bit - I wish I could've gotten it in a 28 as it doesn't go nearly as snug as I'd like. The straps are great! They adjust all the way along the strap and are made of an interesting velvety stretch material that I thought would be uncomfortable but is actually exceedingly nice to wear. The gore is a nice low height and the wings seem fine upon initial trying on, but that will remain to be seen when I wear it on a nice stressful sweaty day. The band is a nice stretch mesh and despite being a fairly big/structured bra it feels pretty light when wearing it.