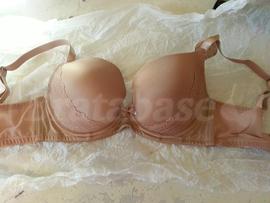 I bought this bra to replace the Jeanie in 30F which was too big for me. Size wise, this fits much better in the cups and the band is nice and firm, and I feel well supported and it gives a nice rounded shape. It's a basic bra but the lace makes it a little nicer. The colour I have is "European Nude" which was darker than what I was expecting, but is otherwise fine.

The cups are stiffer than the Jeanie. The tags on the back band are pretty scratchy, although it'll probably soften up over time. The shoulder straps feel like they have sharper edges than the ones on the Jeanie as well. I like the way this bra looks, but looks aside, next time I'd go back to the Jeanie just because it was more comfortable.

Update: The top edges of the cup have a tendency to turn out in time. I don't know if it's because the outer fabric has shrunk, but it's kind of annoying.

Update 2: The top edges have curled so much that I had considered this unwearable and was about to toss it. I cut a long slit on the fabric along the top edge of the cups just to see if it made a difference and it totally restored the shape! In the photo you can see the amount the outer fabric has shrunk (I didn't cut any fabric away). Not sure if I would wear this as is under a t-shirt, but under a white sweater it looks completely fine.