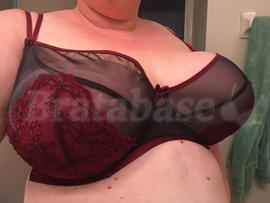 The minute I saw this colorway I knew this bra had to be mine. I am a huge fan of burgundy, and this matched my favorite kimono, my favorite dress, and a bunch of other favorite items. I also have been wanting another Curvy Kate plunge, the 40J - Curvy Kate » Lifestyle Plunge Bra having been a good match for me. I was planning on wearing this as a bedroom/lounge bra, so the fact that the straps didn't seem sturdy and the midi longline might dig in didn't bother me. So the minute this bra became available on ebay (my usual go-to for cheaper bras), I snatched it up. And I have to say, I have been pleasantly surprised.

The first thing I noticed when looking at it in person, and confirmed in pictures and measurements, is that the cup is taller towards the straps, meaning the straps aren't falling into my armpit. Effectively, having the cups taller makes the straps less wideset, a major problem I've had with other Curvy Kate plunges. The first thing I noticed when putting on the bra was the excellent support that the wide and not-to-stretchy band gives. The band extends about an inch/2.5 cms down, kept in place by very soft comfortable plastic boning on the sides. I thought this would be terrible and dig in. In fact, it keeps the band from rolling up, a major discomfort for me in other bras. The wide band means that even more breast weight is distributed away from the straps, so it's ok that they are only about a quarter of an inch wide each- their placement and the surface area of the band tension the weight away from my shoulders. I have been suffering shoulder pain lately, and after trying the bra out for about four hours I had no shoulder pain at all.

The rest of the bra fits very well, better than most Curvy Kate plunges I've tried. Pay no attention to the gaping in the pictures- that's just because my arm is raised to take the picture. In reality, the bra gaps very slightly on my small side and is just right on my large side. The band tension is just right for me, and the plunge is fairly plunging on me- about as good as I'm going to get with a non-Comexim bra. The only problem I have is that there is not enough center room- a pretty typical problem for me. Still, the gore feels a lot more stable than on some bras I own- probably due to the band being just right.

The sides could be slightly lower, although they certainly aren't eating my armpits. Every once in a while the wires get me a bit when I bend over. The side boning on the other hand almost never does, and the band doesn't roll up or flip. I may have to re-think my position on boning, and I definitely think I need to think about how bands support me. The wires are a good width on me, and a fairly good shape. I recently have had some changes and learned I can no longer tolerate very narrow wires, they cause part of the shoulder pain, so around 7.5-8 inch wires are best for me now as long as they are not too tall (and these wires cooperate fairly well).

As far as the bra itself goes, it fits closer to a narrow 40JJ than a 40J, meaning that most in larger cup larger band sizes could probably size down one cup and be fine. The band is a true 40, and lovely with just the right amount of stretch, so keep the same band size.

The look of the bra, from the black and burgundy striped bows, to the cross-dyed lace, to the thick ribbon elastic at the band, is gorgeous and soft and smooth. I love the look and feel of the bra. It's nice to wear pretty straps for once. I do feel both pretty and sexy in it, and I think the wide band has some back smoothing capabilities, which I appreciate. The cups create a rounded profile, not too east-west, and the stretch elastic on top keeps everything locked in without cutting in. It looks in my front facing picture like the mesh bulges, but that's an optical illusion.

The mesh is firm and properly tensioned. The sewing is very nice. This is a bra which is fairly expensive, and in my mind, the quality of sewing, comfort, design, and materials match the price point, something I don't always think about Curvy Kate. This, along with 40JJ - Curvy Kate » Curvy Kate Poppy Balcony Bra (CK10011), show me that the brand is trying to improve, and perhaps some of the creative thought and quality materials they put into their Scantilly line is coming over into their regular line and making an impact on their fuller bust fits. Certainly they thought about structure when creating this bra, and I do very much appreciate that. Mostly, I appreciate that I get to wear a bra that reminds me of some of the best, most beautiful bras out there, and at my size that's a luxury.