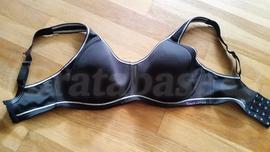 Not my favorite sports bra, but okay in a pinch. I originally purchased it on sale on Amazon, and it was miles better than anything I had - I'm now preferring the much narrower Panache Sport underwired sports bra to it, but will probably still keep this as a backup.

The good: I love the way the gore tacks and separates my boobs in this bra, while locking them down (great for yoga - no cleavage, can actually touch thumbs to sternum). Also, I've worn it running a bunch of times and find it controls bounce and wicks sweat really well.

The not as good: My boobs are narrow, FOB, and projected, and I am petite (other than my boobs), and like other Freya (non-sports) bras I've tried, the wires on this are just ridiculously wide on me. They kind of cut up into my armpits - not enough to chafe and never wear it, but enough to be noticeable. There is also space at the top of the cups, but it still seems to do its job without a lot of jiggle. It's made of a spacer foam, which is pretty comfortable, but I do prefer to wear nipple covers under it if I'm wearing a solid-colored top as I don't prefer to have the outlines of my nipples visible. I have this in the "Storm" colorway; I don't love the white contrast stitching, but it was the most "basic black" option available.