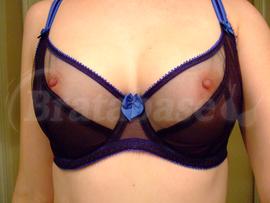 Shape: round, projected, even, close set, on the narrow end of average root width.

Oh, no. Ohhhhh no. Okay, so I got suckered into the $15 Encore sale and I did not heed your warnings, bra friends. I knew that the sizing seems utterly dependent on the colorway, so I thought I did my due diligence by ordering a couple sizes (30E and 30F) in this colorway off of Amazon. I figured I'd try 'em on, see what fits, return them, and buy it cheap on Encore. The first problem is that despite the 30E and 30F both being the same colorway and band size, the 30E was noticeably stretchier. How? How even? I also quadded like crazy out of the 30E, with the top part of the cup cutting into my tissue. At the time, the 30F looked, fit, and felt better, so I figured I'd go with that in the Encore sale. Unfortunately, I think I was too enticed by the $15 price tag, so I ignored a lot of fit issues in my Amazon trial which are so terribly evident now that I've purchased the non-returnable bra. Where shall we begin?

1) Not enough immediate projection. It's not super obvious until I take the bra off, but the underwires sit like 1 cm below my IMF.
2) The cups are way too wide. A solid quarter of the cup extends into my armpit where I have no breast tissue, so it's sort of a sad wrinkly mess in there.
3) The cups are also too big (the width issue is probably part of this). There's wrinkling towards the top and inner sides of the cup.

The single pro is that the 30F I got is actually tight in the band, which is great for me, as I'm on the narrower end of 30 bands. If you're a true 30 you might find it too tight.

In hindsight, the 30E was *probably* the correct size, but there's just a big ol' shape mismatch going on that was hidden by the larger cup size. I'd say if you have much upper and/or center fullness, or are very projected, you should probably avoid. Actually, the mysterious sizing inconsistencies should encourage everyone to avoid, ok?

Final notes: this bra sure *looks* cool, but if you don't 100% fill out the cups, there will be wrinkling, and the wrinkling doesn't do you any favors considering how sheer it is. The mesh is also not nearly as soft and comfortable as I would've liked. It's actually totally non-stretchy, stiff, and kind of scratchy. Boo. I cannot believe this is worth anything near what the MSRP is (like $50 or $60?), and I'm bummed I paid $15 for it https://d28qt14g3opchh.cloudfront.net/smileys/icon_sad.gif" alt=":(" />

p.s. Various reviewers indicated that the matching panties in this style ran super small. I took this advice and sized up. I have 38" hips and found that, at least in this colorway, the large brief and thong to both be too big; I should've gone with a medium. Double fail.

Bottom of the cup:
Can't quite fill it
Cups separation:
Too separate for my boobs
Cup's width:
There is empty fabric on the sides (Cup too wide)