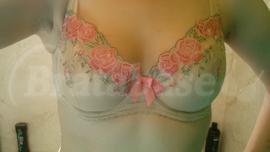 This is a beautiful bra and goes with my skin tone perfectly, sadly though it's not a great fit. I had previously tried an SM in a 70F and had some gaping so I thought 70E or sister size would work (this one does have an altered band and fits like a 65F). I get quite a bit of gaping near the gore, and I do have space at the top of cup, but the embroidery makes it lay flat so it looks like it's closer to fitting than it is, but you can somewhat see the gaping near the gore. The straps are a bit too wide as well which could be from it being a 75 band altered down and the underwire does poke me a bit under the arm. The tags have fadded a bit but the bra itself is in great condition, unfortunately I will have to pass this one on.

Strap separation:
Are too far apart
Underwire length:
Runs too high under the arm, it pokes
Top of the cup:
Wrinkles, can't quite fill it