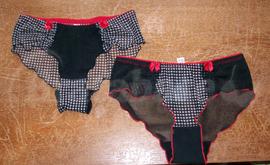 This bra has customizations: reduced gore, reduced cups, and three row of eyes.

Also, it looks different than all the others because I took a seam ripper to it. The lace trim along the top of the cups and the gore bow was really awful. It didn't look that nice on the bra and in my opinion cheapened the whole look. In Comexim's images of this bra, the trim is a little more solid and ribbony. They should have stuck with that.
Anyway, I rid this bra of it and replaced it with red bows at the gore and where the straps join the cup. A bigger one I had removed from an Ewa Michalak bra a few months ago and smaller ones at the straps that I had in my sewing kit. I think it's nicer now.

So, I was curious to try a Comexim with reduced cups. Sometimes I bubble over my 65G/60H but not enough to go up to a 65H. I figured a 65H with reduced cups may be workable though. Something like a 65G.5 instead of a full cup up.
Aside from that, the bra also has my name. Spelling is different, but it's close enough. So, I kind of needed it.

Anyway, the band is really soft and really comfortable. It has a nice gentle stretch to it and I feel secure and well supported on the loosest hook. I could go to the middle, but the end is fine so there I'll stay. I think I like the thicker band and the addition of the extra row. I may order that for myself in the future.
The gore tacks and the wires are comfortable. Right around 5", give or take a cm, and that's where I like them. They come up a bit high under the arm. I don't experience any chafing, but I feel it and wish they were lower.
The straps are soft and smooth. The adjusters stay in place well. They're not super stretchy, but they are long. I have the adjusters sitting on my traps now and I'll have to shorten the straps at some point. They are not too wide set for me. This is where my broad shoulders are a bonus for me. The high sides would be unbearable if the straps were also too wide, but that's not the case thankfully.
The cups fit pretty well. I fill most of it up nicely, but there is some empty space at the top where the strap joins the cup. This is also the case with my 65G - Comexim » Irish Coffee Biustonosz (335). The bra fits well everywhere else and the empty space isn't very evident, with or without a top.

Overall, Jacqueline is a comfortable and appealing bra. I'm happy that I got to try a customized Comexim and got to experiment with a cup up. In the future, I think I prefer the slight smallness of my unaltered 65G/60Hs but I may go for that third row of eyes.