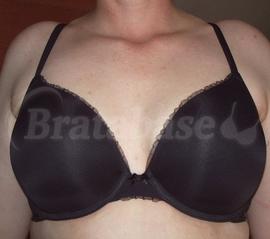 This review is for the black colorway.

Also of note, I tried on a white one, which seemed looser in the band, but smaller in the cup. This 32DDD in black felt the same in the band as the 30DDD in white that I tried on, so the black *might* be a snugger fit (band on this 32 only stretches to 31", although it's still new).

I'm not a fan of the lace edging, but can't feel it and it doesn't show under shirts. I'm also not a fan of how the bra looks on its own, but it gives a pretty good shape with a shirt on, and doesn't show as much as I thought it would (ie, under the arms, etc.). It is a slight push-up.

With a few more wears, I believe the cup *is* too small. I find I don't wear it very often, partly because most of my shirts are cut too low...and partly because I think it cuts into tissue a bit on the sides, simply due to it being a bit too small. Currently deciding between keep and swap.