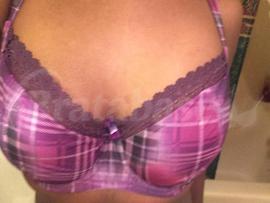 This bra's measurements have been altered
Altered band, Took in top lace

Considering the fact that this bra is pre-owned I feel like the fit would've been somewhat better, although, considering the fact that this is the closest that I've gotten to my actual bra size thus far I feel it's just a matter of bra style now. Unlike past bras that I've owned this one does not climb all the way up into my arm pits or dig into my sternum which were problems that I experienced with Curvy Kate (more than likely due to wearing the wrong size) and Parfait by Affiniates (34G) which felt as if the gore was going to puncture me at any moment and after altering it and getting the bra wires under my boobs I found that the cups were too small ((don't the cups run smaller in this style))?? Problems that I /did/ experience were the usual inability to fill the bottoms of the cups completely while filling out the top entirely which shouldn't be too huge of a problem as it isn't noticeable under shirts, I did take in the lace though as it had a bit of excess fabric, probably due to previous wear. Another problem that I've been experiencing is that over time, my boobs will gradually try and make a break for it by slipping out from behind the underwire but I'm sure that as soon as I figure out why this is happening I'll be able to do an alteration to fix this issue. At first I was a bit reluctant about getting this bra because the straps only adjust halfway and I'm petite ((5'1)) with a narrow frame but to my surprise they haven't slipped once which is also a common issue that I experience. When it arrived in the mail the cups were a bit wrinkled due to the fact that they weren't padded in with paper but now that I'm gradually starting to break it's spirit they're straightening out. https://d28qt14g3opchh.cloudfront.net/smileys/icon_smile.gif" alt=":)" /> I feel pretty confident in saying that I can literally feel the difference in wearing a bra that's 98% close to fitting over a bra that doesn't fit at all, whereas I feel little to no support in my others bras it feels as if I'm getting a firm, yet comforting and supporting hug from a friend (AKA this bra holy Jesus) and my shoulders and back are thanking me for it 😂. Overall I wpuld reccomend buying the Cleo Sadie if you have a similar breast shape, if it wasn't discontinued.

It was a perfect fit minus a few flaws.

Underwire length:
Is too short on the side, boobs escape
Bottom of the cup:
Can't quite fill it
Cup's width:
Cup encloses the breast tissue comfortably on the sides

It was a perfect fit minus a few flaws.

Underwire length:
Is too short on the side, boobs escape
Bottom of the cup:
Can't quite fill it
Cup's width:
Cup encloses the breast tissue comfortably on the sides