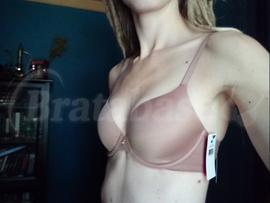 I got this bra super cheap, and that makes me happy. https://d28qt14g3opchh.cloudfront.net/smileys/icon_smile.gif" alt=":)" />

It isn't a -perfect- fit, but it fits well enough to keep. It is super comfortable, I actually forget that I'm wearing it (score). I expected the material to be kind of satiny, but it actually feels more like a soft jersey knit. Which feels lovely, but I can tell it's going to pill sooner or later (probably sooner). Ah well.

The cups are wide and shallow. A little too shallow on bottom for my FoB breasts, so the wires don't sit as high as they should on my larger side, but the bra stays still once it settles and I feel supported, so I can deal with that. I only get occasional small gapping at the top, but the cups are tall enough that it isn't particularly obvious. I'm usually a stickler for that. Strangely enough, the cups are thicker at the top/center than they are on bottom/outsides, but that really works out for my shape (shallow on top/center, projected on bottom/outsides). The band is larger than I need, but I can wear it on the middle hooks without it really moving around, so that will be fine until it stretches. For reference, I actually measure 26DD.

I love that I finally have a functional "nude" t-shirt bra that isn't push-up padded, which I can convert to racerback (there's a j-hook on the straps). That's what I was looking for in the first place, 30+ bras ago. The color is a little darker than it looks in photos, but I don't wear white shirts so it should work well enough for me.

Overall, I'm pretty glad I caught this on sale at Nordstrom (online), and that they also gave me a $10 coupon to use during the sale (with free shipping and returns) -- making this the cheapest bra I've ever purchased. I think the bra gods finally decided to have mercy on me. If I'd spent more on it I'd consider returning it, but this was a nice little surprise!