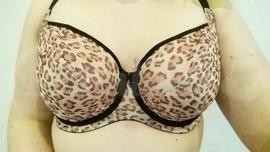 As a bra nerd, it's pretty cool to finally hold a bra in your hands you've been seeing only pictures of from season previews... I'd wanted this bra from the second I saw the first trade show pic of the pink leopard.

It's just as cute in real life as it was online. However, there are some issues. First, the band runs quite big, stretching to 33.5 in. I'll be exchanging it for 30FF. I thought it was quite odd because Panache unpadded bras typically run tight. The shape seems like a new one for Cleo--it's not a Marcie clone, a Lily/Erin clone, etc. It is a 3-part balconette, but different from those. The top section is more closed than those, but I get that dreaded diagonal wrinkle. I'm hoping the tighter band will hold me in better so I can fill out the cup all the way. It is a typical Cleo round shape.

I'll have a more in-depth review when I get the exchange and I can wear it for a day (in 3 days--bless amazon!), but so far I'd say this bra is probably best for FOB, maybe better for taller roots, and worth trying if you liked Lily or other Cleo balconettes.

Strap separation:
Are too far apart
Top of the cup:
Wrinkles, can't quite fill it
Band fit:
The band is definitely too big