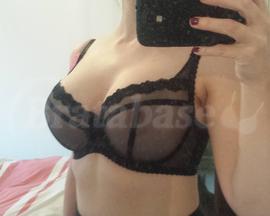 Oh my, my bank account is in so much trouble!

I just received my first Ewa Michalak SM, and it's love at first wear.

I was looking for a bra that would fit as well as my beloved unlined Cleo balconets, but with a more grown up, sexy look (think less ditzy polka dots, more va va voom chic), and boy does this bra deliver!

Let's start with the shape it gives me, WOW! My boobs are front and center, and very very round. I hear a lot of people say that the SM cut gives them more of a natural shape, but on me it's really super round, even rounder than my Cleos. On top of that, my boobs are hiked up really high, my husband even remarked on their perkiness. I'm used to well lifted boobs by now, but this some A level lift. It gives me very soft looking cakes on a plate style cleavage, which I love.

Second, the bra is gorgeous! I've always love sheer bras, and this one strikes that perfect balance between looking minimalist, sexy and sophisticated with its black mesh and black lace trims. The contrast between the sheerness of the mesh and the opaque seams and lace details just really appeals to me. It's very light to wear, which is also a big plus for me. The straps are long, fully adjustable and do not slide down.

In the Pl cut I'm in between a 75FF and a G cup, but for this cut the FF is the right size. The seams are laying flat and do not cut into my tissue at all. I have no gaping at the top, and no quad boob whatsoever. Ewa's site said that the band runs tight, and I agree as it's tighter than my PL Triumfs, which is good for me as I seem to be in between band sizes for this brand. The gore is lower than those of my Cleos, and the wires don't come up as high under the arms either, which is nice for a change. I'm wearing the bra for about two hours now, and it's really very comfortable.

As this bra is completely sheer I do see a small fit issue in my pictures that I have suspected I have in most of my well fitting bras: the wires do not follow my IMF perfectly on the inside curve towards the gore. The thing is, I have quite a wide space between my boobs, they are a good inch apart at least at the top, and even more at the bottom due to my splayedness. A bra that would perfectly follow that shape would need to have a pretty wide and very tapered gore. However, I also need bras with narrow wires, which almost always have narrow gores that go down in parallel (UU). I think that a bra that would truly follow my IMF all the way would give me a very east west shape (which my breasts have naturally). As I prefer to have my boobs pushed front and center, and the little bit of empty space at the inside of my wires does not seem to compromise the support this bra gives me I'm willing to live with it, but technically I suppose this bra is not a perfect fit.

My Cleo Minnie has been my favorite bra for a very long time, but this one seems to be destined to take over the top spot now.

With that in mind, I'm going to have to exercise some serious restraint now, because I do feel the urge to buy this bra in EVERY SINGLE color way. There is that lovely beige and black one, and that bright red version that's a little hootchy but kind of cool, and that pink and red one that has a bit of a carnival vibe going on, and the white and pink Wanilia that's only available on bra obsessed, and so on.....