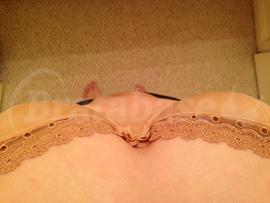 This is my first well fitting bra. The band is stretchy but doesn't ride up (yippee!), though it is not tight enough to really enhance (i.e. lift) my dense, low-set shallow boobs. However, it is a nice everyday bra when I don't want a little extra oomph.

When I first got it, I had to push the underwires at the center gore towards the armpit end of the channel and bend the underwires away from my body there because it dug into my sternum, but the underwires no longer bother me. After a few wears, the underwires became comfortable centered in the channel. My main complaints are visibility under clothing because the top edge of the padding below the lace is so thick and the underwire length/shape. This bra would fit even better for me if the underwires came up higher and more vertically under the armpits to contain my tall side boobage instead of flaring out.

I have mixed feelings about the looser band: on one hand, I do not worry about reverse letterphobia, warped underwires, warped hooks/eyes, or quad boob as much; on the other hand, a tighter band would provide better support (i.e. actually lift..). Anyway, Juna is really versatile and I would recommend it to anyone who is shallow or fuller on top unless they have a very narrow root.