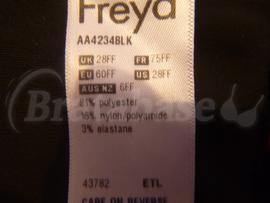 Cons:
- Band has stretched out quite a bit since purchasing and is now a bit too large. I measure 26 inches around my ribcage. This black bra seems to be smaller than my purple Deco however, as black bras often run smaller.
- Centre gore doesn't quite lie flat against my sternum. Again, this is probably because I really need a 26G.
- The cups can gape a little at the top after I've worn it for a while. This isn't major but it can look a bit funny under some clothes. When trying this bra on in the store (Brava in Australia) I asked the assistant if it would be worth sizing down in the cup and she said that the issue isn't that the cup is too small, but rather that the straps are too wide for my narrow shoulders and so they are closer together than the bra is designed for them to be and thus distort the shape of the cup. I think it might also have something to do with the band being slightly too big and riding up in the back a tiny bit.


Despite these issues, this is the best fitting bra I have owned so far, and I wear it on an almost daily basis. It's comfortable and looks good under clothing.

EDIT: Having lost some breast volume recently, this bra is now definitely too big for me in the cups. It is also even bigger in the band. It gapes significantly at the top, and is only really wearable under tops/dresses that hold it down. My purple deco in the same size is even bigger and really isn't wearable at all. This is such a shame as I love the shape given by these bras! I have a non-wired deco and a strapless deco on the way, both in a 28F, so I'm hoping those will fit! I will most likely order an original deco in a 28F at some point, as well as the half-cup style in a 28F.

EDIT 2: I have received the strapless and wire-free decos in 28F now. The wire-free is great, and the strapless is a weird fit though it is wearable. Without the straps on, it gapes at the top outside edges of the cups, though the centre gore won't lie flat. I will order an original deco in 28F soon and review!

EDIT 3: Back on the pill, boobs have grown again, now a great fit! Though I do get a little gaping after a day's wear mostly because the band rides up...

Center gore placement:
Doesn't lie flat against sternum
Top of the cup:
Wrinkles, can't quite fill it
Band fit:
The back of the bra is not at the same level as the front (rides up)
Strap separation:
Are too far apart