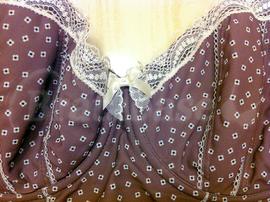 I only recently got this bra but so far I love it. I feel like my breasts look fabulous in it. While my band size is actually between 31" and 32", I went for the 30FF because I'm finding that with some other bras that I've tried with a 32 band, I sometimes have to use the middle hook right away to get a good snug fit.
This bra (at the time) was the closest in containing the sideboob area, while at the same time, it brings my breasts closer together in the front without squishing them.
This bra is also one of the least quadboob-inducing bra that I've tried on! I also feel really supported, maybe because of the long-line style.
The only thing I don't like is having to hook up so many hooks! But I would definitely buy another Freya bra, because I feel really great wearing it.

[ETA]: Aaand not much later, I get tons of quadboob. Turns out this bra is too shallow for me and my breasts are not as wide and as shallow as I thought. I ended up getting a 30G which fits better, but still a tad wide. But I love the longlines too much to give them up lol.

Strap separation:
Not a problem
Underwire length:
Is too short on the side, boobs escape
Cup's width:
Outer cup cuts into breast tissue in the sides