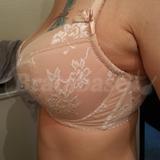 Wore sports bras exclusively until I was 19, then wore clearance-rack Wal-Mart bras. Mostly 34Cs and 36Bs, because ... that's what Mama wore.

Thought JCPenney's bras were a huge improvement, but found it super disheartening that I could apparently never fill out an unlined bra (still feel pretty lacking in confidence when I wear one, even if I fill it out). They put me in 34Ds and 36Cs.

Felt like it was a huge improvement and favor to myself when I "got fitted" at VS. When I was 20 they measured me at 30D/30DD; at 27 I was starting to have constant pain and could see that my boobs had grown. They measured me as between 32DD and 32DDD. Complained of being stabbed in the armpits by the wires, and got pushed into 32DDs, and told not to size up.

A month after that VS experience, ended up in the ER for breast pain-- they were tender, swollen, warm to the touch in certain places and parts of my breasts were rock-firm. I was scared it could be breast cancer, of which there is a history in my family. The doctor diagnosed it as mastitis and asked if I was pregnant or nursing. When I said no, he said that ill-fitting bras are among the more common causes in cases like mine-- that's not to say everyone in the wrong size will get mastitis. I have a pretty crummy immune system.

Several months later, after a lot of digging for some other bra fitting method, I finally found ABTF on Reddit. It took a couple of months for my breasts to stop being so sore. I think they've finally forgiven me, now.

After a bit of trial and error, and several wrong calls on my part about my shape, I believe due to the way bras fit on me that I:

- have exceedingly short roots (too short for Cleo Lily, dude!!)
- have narrow roots
- am fairly projected
- have the tiniest little narrow shoulders ever
- may be slightly FOT
- have soft tissue
- am center-full
- have a V-shaped ribcage
- am very close set
- may have a slight omega shape to my breasts-- or they may be conical?
- may be high set

Still sorting things out and learning, and have found that Polish is the way to go, for me.