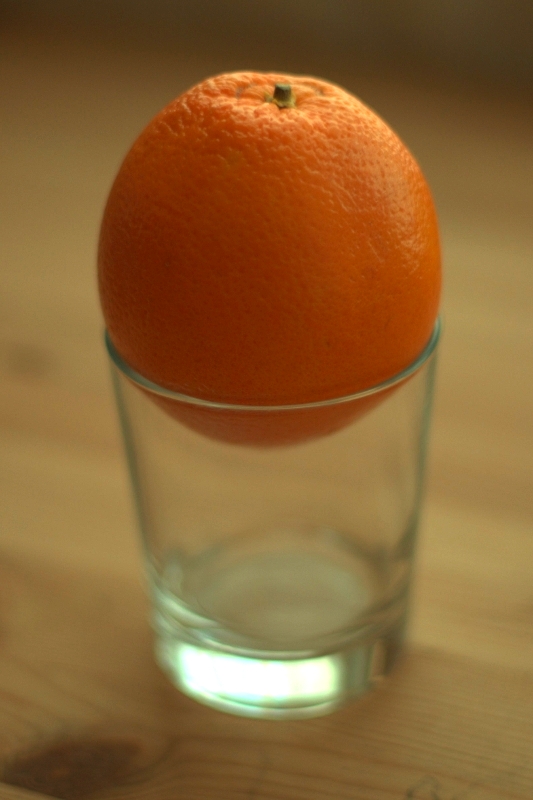 The orange in a glass effect is a common bra fitting problem especially in smaller breasts, but also generally in breasts with very wide roots (whose owners often don't know that they have very wide roots - see our article on breast roots).

If you think that your breasts are small and the cups looks empty, you will assume that the bra is too big. This is only true if your breast tissue is completely enclosed by your bra's wires. Otherwise your wires will sit on your breast tissue, so the bra doesn't start at the correct position and can therefore not enclose your breast like it's meant to.

The bra will look wrinkly and not filled, even though it's actually too small!

(In the picture, the orange is a breast, which is trying on a glass bra. The glass looks empty, but that's only because the glass doesn't have a big enough opening for the orange! The glass is, in fact, too small for the orange. It needs a bigger glass with a big opening :))

If you find yourself to have an orange in a glass problem, you could be interested in the article about broad root breasts, since it's a problem most commonly found in this shape.

Generally though: Your bra's cups are too small. You need wider wires and usually bigger cup sizes.

On Balkonetka: Pomara?cza w szklance (Polish), the original article on the orange in a glass

On Venusian Glow: Shallow Breasts With a Broad Base, with tips on which bras have wide wires

On Venusian Glow: Empty Space In The Cup Aka The Orange In A Glass Effect