How are measurements calculated

The measurements of a bra are shown on the table you see when looking at a bra size's page. 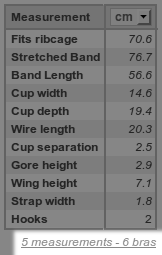 These numbers come from the bras that users add on the same size. Below the table you'll see a summary indicating how many bras were added and how many of those have valid measurements. Clicking there will show you the following table:

On this case 6 users have added their bras, and one of them have not added her measurements. The last two entries have had their cup width measurements disabled.

These numbers are the mean of the values entered by the users. Not all measurements entered may be considered for this average.

The cup width is the only measurement right now that does not use a regular average, but it uses a weighted average in order to favor smaller numbers.

For each size, the site will calculate a set of interpolated measurements. These measurements are used for two purposes mainly.

These interpolated measurements play a small value on the final number since the actual bras' measurements will end up providing most of the data.

The interpolated measurements are obtained from a couple of sources. From the adjacent sizes of a particular size (up and down for cup and band) and from models that are marked with having the same cut. This allows us to estimate measurements for sizes where we don't have bras.

The final number on each measurement is the average of both the "User average" and the "Interpolated" measurements.

When looking at a specific bra size's page you will see three lists showing other related bra sizes, these are:

Two bras are similar to each other if their averaged measurements match each other within a threshold.

Similar bras are calculated based on the following measurements:

These similar bras will be suggested as you browse through your bras or through the list of available bra sizes in Bratabase. They are displayed on a page of a bra model in a certain size. You will find that some bras are ranked as similar even though they are not the same size, neither cup nor band wise.

The calculations which lead to bras being ranked as similar in measurements are also important for the bra recommendations.

Why aren't there any similar bras?

Sometimes you will find a message telling you that no similar bras were found, this most likely happened because Bratabase does not know of any bra that is similar to the one you're looking at.

This situation will occur less often the more bras are added to the site.

These will also fit

These are the bras which fit the users who own this bra and have also reported it to fit.

This is similar than going through each of their profiles and looking at which other bras fit them.

Use this if you are looking for other bras that will work if this bra was also good.

Keep in mind that this is only an accumulation of those bras, and these results are not tailored per user. Refer to the recommendations for personalized bras.

These have the same cut

These are highly likely to fit the same, so they are as good as this one.