All good things have to come to an end

The $10 shipping coverage for shipping will be no more. It has been 586 days, that is over a year and a half that we've been doing this since it launched.

But it had not really picked up since the last 5 months. 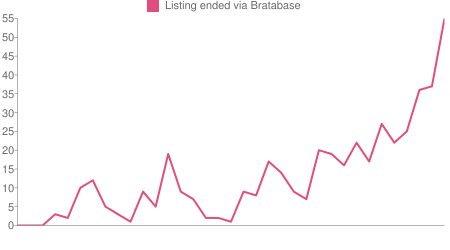 In this time near $2000 has been invested in finding homes for new bras and flying them around the world. It has brought me with so much joy to be able to help this way to so many people, but I think that it has served it purpose very well.

So this is what is going to happen, coverage will work the same until Monday February 18, 2013 23:59 (GMT -5). All deals closed before that are still covered.

After that, a $200 budget will be separated to cover for shipping coverage and each bra in a listing will get the first $5 covered until the budget runs out.

All give away and exchanged bras will remain fully covered.

Update: Here's the spreadsheet with the budget available