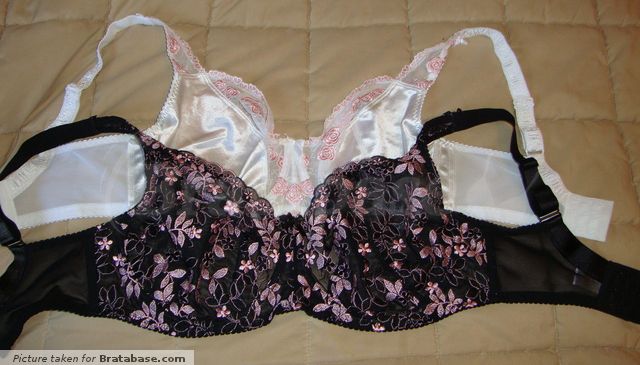 Last month we were approached by the people behind Wholesale bras and they offered a couple of their bras to try. I never heard of their bras before, they are a supplier that manufactures their own brands, Gemm and Dipti bras. So hey!, we agreed to gave them a shot

This company has been around for 30 years designing bras!, but on 2008 they launched their own Gemm brand and started to manufacture them. They are UK based and mostly do whole sales to retailers, mostly online.

A great thing on their favor is that their bras have quite a wide range and are very reasonably priced! Between $20 and $30. Their bras do start at band 34 but they go up to J cups and 46 on band sizes.

You can find their bras on Plussizebras.com.au or on some eBay resellers. I do wish they had a better way to be found though.

So, here are the reviews: The material of this bra is very soft and satiny; it reminded me of my (ill fated) adventure with the Curvy Kate Lottie. What really makes this bra standout are its details. The gore and top portion of the cups are embroidered with a rose detail. Underneath the gore and along the top of the cups has a soft pink heart detail that is a nice touch. The band on this bra feels nice and firm. The center gore tacks nicely, and there is a smooth line on the cups. When I did some swooping and scooping, my larger breast did a bit of quad-boobing but nothing too bad. I like a more natural profile and this bra does just that. I was worried about the embroidery showing through, but under a thin t-shirt it isn't glaringly obvious. I love that the straps are fully adjustable. Unlike most bras in this size, there are three hooks instead of two While I love the fully adjustable straps, I wish they weren't fully composed of stretch material. The look of the bra is pretty, it just isn't something that I would typically go for when looking for a new bra. When I first selected and received this bra, I was worried about how much the embroidery would show through tops. However, when trying It on with a t-shirt there is no show through. The band fits nicely and I like that there are 3 hooks for more stability. I initially chose this bra because I am always on the hunt for a supportive black bra. I also thought that the pink flower embroidery was a nice touch for a black bra. The band is looser than the previous model that I that I tried from this brand. The cups also seem to be wide enough for my breasts, but the gore doesn't lie flat. I really like how this bra makes my breasts look from the front. The side view leaves a lot to be desired. The straps are made of a semi stretch material and combined with thickness of them makes for great support. Additionally, this bra also has 3 hooks for even better support. Other than the fit issues, the only thing that bothered me with the bra was that it was a bit itchy. I feel as though that would change after the bra was laundered a few times. I really wish that the gore on this bra sat flush. As with the white bra, I like that there isn't any show through of the embroidery. It gives a nice lift from the front, but not so much from the side. The thick straps and 3 hook closure lead to feeling very supported.

When comparing these two bras together, you can see that the band on the black one is longer.