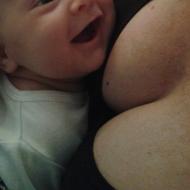 I have only just hopped on the correct-size-bra-band-wagon and am still very much in the process of figuring ... out what works for me. This is not made any easier by the fact that I am breastfeeding (12 months and counting) and still am not used to fact that actually I have BREASTS, as opposed to my pre-pregnancy 'breasts'. Also, because of breastfeeding, my size, shape and 'density' aren't exactly constant.

Pre-pregnancy I had diagnosed myself as being a 70A, although there literally only was one bra model that more or less fit me (in that same model I would now measure something between 70E and 70F, European sizing). Although my underbust measures only 27", I was unaware of the existence of bra bands smaller than 70/32 and convinced that my breasts simply were negligible. I was also convinced that my breasts were oddly shaped and, well, unattractive: wide-set, wide-based, pointy, East-West (and slightly South) facing, with puffy areolae. My breasts are what I would call 'pear-shaped': a wide, presumably 'base' topped with a puffy areola. They are very wide-set starting practically under my arms with a clear space between them. Their overall appearance is quite 'conical', not unlike the effect created by a '50s bullet bra, but decidedly less 'perky'. I hope I don't have to explain why this is not exactly a look I covet ... ;) I had vague hopes that pregnancy would 'cure' them into a more spherical shape, but it didn't: my breasts are still more or less the same, only bigger ;)

Having said, that I've never been truly unhappy with my breasts, at least not with their size. As to their shape, I would dearly love to find a bra that fits me well and is actually flattering -- I don't need them to look bigger or smaller, just rounder and perkier, and slightly more 'up front' ;)

My typical fitting issues have remained much the same despite pregnancy and breastfeeding: bras typically have too narrow underwires in combination with too deep cups. Sometimes the front edge of the cups cut into my breasts (especially on my larger right side), even when folds and ripples at the top of the cups suggests I'm obviously not filling them. Bras with wide enough wires are often too wide in general and have their straps cutting into my arms. Most soft cup bras I've tried -- if I manage to fill them out at all without too much wrinkling -- give me an odd and unattractive shape, almost as if I'm not wearing any bra at all; most padded bras are simply ill-fitting and have cup edges that either gap or cut in.

I'm a rather extreme hourglass with the following measurements: shoulders 104 cm - waist 64 cm - hips 104 cm. With a 69 cm underbust and 88 cm full bust my bra size is around 28F (the only difference to my pre-pregnancy situation was my full bust measurement, 83 cm, which would have translated into something around 28DD, had I been aware of proper bra fitting then). My breasts look much smaller than they are, partly because of their shape and partly because of the shape of my body: they all but disappear against my very conical torso. As I'm also only 161 cm tall, finding fitting clothes is a nightmare. Length and waist-wise I should wear XS/34 or S/36, but I run into problems with my shoulders, bust, and hips. My current 'uniform' consists of a sleeveless, cowl neck top (IDEAL for breastfeeding and very flattering for my shape, I think), a cropped, tailored jacket and a pair of high-waisted, straight-legged trousers. However, I love vintage and am fascinated by historical fashion silhouettes, especially the ones that include corsetry.

... would be an unpadded half-cup that gives a lifted, separated, 'Regency-style' cleavage. Think Ewa Michalak HM but slightly shallower, Bravissimo half-cup but with sturdier wires and a less 'plastic-y' feel (or smell), Masquerade Rhea without the padding, and Chantelle demi in a band size that works for my 69 cm underbust.

I'm not a fan of the typical 'plunge' or 'push-up-style' cleavage: for some reason it makes me look ridiculous and disproportionate. Along the same line, as much as I like boot and cowl necks, I really despise V-necks -- they just don't work for my body shape at all.

Triumph Amourette balconnette in 70E -- in 70A (!) this bra used to be my 'go-to' bra before my pregnancy. It was the only bra that sort of kind of fit me (I didn't even know sub-70 bands existed back then) AND gave me a reasonably acceptable shape. Now, in 70E the cups only just fit me, but the band is obviously too loose and the shape far too angular and too East-West for my taste.

Freya Patsy and Piper in 28F and 28FF -- MUCH too narrow and MUCH too deep, cup edges cutting in regardless of the size, monumental 'Freya puckers'

Fantasie Elodie in 30E and 30F -- this one actually almost fit the way a bra should fit, but at the time I wasn't fond of the design and the shape it gave. Maybe I should give it another go though ...

Panache Andorra in 28F -- slightly too wide, depth is fine, but slightly odd shape (worse in 28E, which gives me outright duck beaks). If it wasn't for the elastic lace the cup edge would cut in dramatically. Wearable, but definitely not ideal.

Ewa Michalak HM in 65DD and CH in 65E (accidentally got this bra in 60F: cup is fine, band obviously too tight) -- perfect width-wise, but slightly too deep. HM fits best (my HM Gold in 65DD is currently my best fitting bra), followed by CH.
Ewa Michalak PL in 65E and CHP in 65DD -- both are the wrong shape for my breasts and body, gapping at the top (cup edges too high) whilst simultaneously spilling towards the centre (centre gore too low). PL fits decidedly better than CHP, though, which is utterly disastrous on me.

Curvy Kate Princess in 30DD and 30E (the store I visited didn't carry 28 bands) -- fine width-wise, but otherwise same problems as I get in Freya: too deep cups, cup edges cutting in, strange folds and puckers. HORRIBLE materials, which applies to all models in my opinion.
Curvy Kate Tease Me in 28E -- although obviously too small this bra is the completely wrong shape for me, the most painful bra I've ever experienced.

Bravissimo Mademoiselle in 28F -- shape almost right, if not for the über-flexible (therefore easily distorted by the slightly tight band) wires. Also, the plastic smell the materials give off nearly knocked me out.

Masquerade Rhea in 28F, 28E, 30E, and 30DD -- this bra truly is perfect although I have yet to figure out which of these sized fits me best as they all seem to work for my somewhat fluctuating shape ...