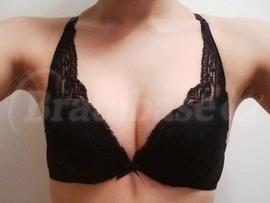 For close-set breasts. Black,nude and red versions of Lucia with convertible straps. More...