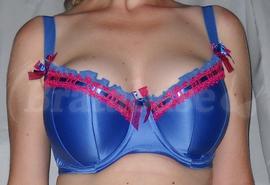 This bra has been made in two different version, both with the same name and style number.

The old discontinued version has lightly padded mesh cups, embroidery and frills on the top of the cup. It is also decorated with a heart pendant between the cups. This version was available in navy/lime and charcoal/green and was released in the autumn/winter collection 2009.

The new version has lightly padded satin cups with embroidery, satin ribbon and mesh frills along the top edge of the cup. The first edition of this, the spring-summer 2010 collection have cups that is about a cup size bigger than the later version.

This bra has been released in many colour combinations:

This bra is classified as Regular bra.

This bra has underwires.

This is a full band bra

This bra has a Stretchy band, on average its band stretches 27.58%.

This model has been discontinued