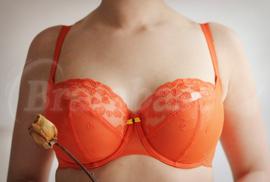 Since AW2014 - Unpadded balconette with partial band, available in various colors. More...
This bra is discontinued.