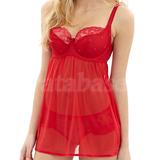 AW2015/SS2016 - Babydoll with an unpadded balconette bra and an open back. More...
This bra is discontinued.