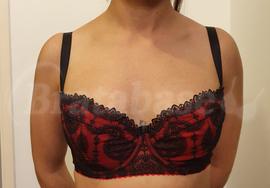 A lot of people seem interested in unlined bras from comexim and for good reason, they're so hard to find and even if they're added, there isn't much information available.

First thing that comes to mind is that the band feels stretchier, almost looser when compared to their lined bras. It's still a 26 but I just like my bands extra snug so, if I were to order directly from comexim, I'd maybe ask for 50 (do they even still do 50 bands? I heard they don't). The hooks are 2 by 4.

I got this bra from someone else who asked for the reduced cups alteration and even then, the cups are too tall for me. The cup depth is great, it doesn't slighty squish like the 3HCs, it's a true fit. It is slightly narrower than the 3HCs, as the plunges are. The cup depth is also a bit larger (0.5-0.8 cm, depending on the 3HC, handmade variation). The straps are very wide. They cause a slight fit issue because the straps are not straight, if they were to sit well on my shoulders, causes slight gaping in some angles. That's really not an issue since all unlined bras gape on me, in some way. I'd suggest asking for the straps to be moved in and the other alterations you normally ask with your lined plunges. I'd like for the unlined bras to be made into 3HCs or at least have the straps moved in with the reduced cup alteration, when I plan on ordering from comexim directly. I have seen and heard that it is possible.

It gives a beautiful shape under clothes. It gives a rounded, natural look. Basically my breasts but a bit bigger and slightly rounded because it's all in one place. The lace does reallyyy show through at the top and even though there's no gaping, the lace sorta bends outwards sometimes and moves away from the bra a bit. I don't know if I'm making sense. The only negative point for me is how much it shows through.

The quality is great, doesn't feel delicate or flimsy. It's a very pretty bra and quite sexy, if only it didn't cover my entire breasts.

Overall, it is still the best fitting unlined bra I own, for now. There is no gaping most of the time, barely any wrinkling, no squishing. Would recommend trying the unlined comexim bras if you struggle with unlined bras.

Edit- after wearing it around for a while, it's very comfy and the gaping magically disappears. it's like a comfy bralette.