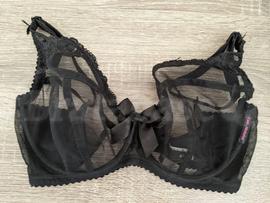 I did not mean to purchase this bra because I already have it in this size. I found it on a resell app that I was not familiar with and I thought I was putting in my address and paypal details for the app, but I was actually entering them for the purchase! This is my all time favorite unlined bra, so I figured I would either keep it and have two or list it. This is an older design of the bra with several details that differ from the new one I have. The band is a see through mesh which I added a photo of next to the newer bra to show the band comparison. The newer band is a black fabric that's a little more rigid. The band measures shorter unstretched, which gives it a firm fit when wearing. Not as firm as the newer one I have or a PL band, but definitely more firm than the PLM band. The bow detail on the center gore is a much larger bow than the newer one. The elastic for the straps is two layers, with the top layer being similar to the elastic Ewa uses now that has the little loops coming off the edge. The bottom layer is a little wider so the loops are covered, which adds to the strength of the strap itself and keeps the adjuster ring in place well. The cup height is a little taller, which could be from wear. The wires are a tiny bit softer and shorter on the outer side. The overall construction and fit feels very similar, with the only difference I could feel being the band firmness. It's still my favorite unlined bra and I'm very impressed with the quality of this bra considering it may be a bit older.