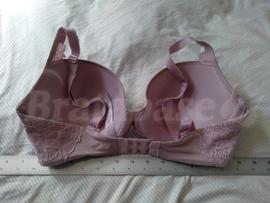 When I first got this bra I had gained weight and was trying to squeeze into VS 34DDD and 36DD. I lost a few pounds and decided to try this brand. I had heard the band was firm and to size up in the band. I had already realized my band size was way too big, but instead of a 32 I got the 34DD. When I got it, I did not measure it, but wish I had. [Or If I did I wish I remember, I vaguely think it was like 30 inches) I believe the band did start off rather firm, because it felt very tight when I first put it on. The band actually probably fit then, but I had to wear it on the largest at first, I was so use to my stretched out Vs bras and remember lining the two up next to each other and seeing how much bigger the band on my 34VS was. I think the band did stretch and I also realized how unsupportive my current bands were, I. ould stretch them out a good 6 inches easy on some. I was use to clasping bras before pulling them over my head so I think the band just felt too small then when it wasnt. The cups were too small at first and I had a lot of quad boob over. The cups were VERY soft microfiber foam, no push up kind of firm wires. It seemed like a basic bra. It came in a lavendar color, and I believe is their microfiber balconette bra. they have. NEW microfiber balconette bra on the savage x fenty site, this bra may be designed slighty differently from a previous year. It felt more like a T shirt bra to me. There mY have been a little gold medallion x symbol on the front that fell off. Now when I wear it, I have lost a lot of weight and cup size volume. I have less quad boob and the wires mostly follow under my IMF and arent super wide. The band now feels too big and I realised I dont like foam/microfiber soft cups like this. I also don't like the color, it does not match anything I have and it gets dirty easy. The gore felt a little taller than the VS brand extreme plunges I was use too. But it was okay. This style lifts my breasts up but not in this size, but I fit about. 28FF/30F. I do have this bra, the band does seem more firm than my Vs and other brands. I dont mind the bra, its okay but not a winner.

This bra had a firm band to start, it was too small in the cups and now the cups fit a little better but the band is too big.

Top of the cup:
Cuts into breast tissue (quad boob effect)
Band fit:
The back of the bra is not at the same level as the front (rides up)