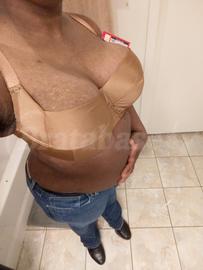 I recently decided to try out Ewa Michalak bras. My local boutique only had one EM bra in my size (75J - Ewa Michalak » Bm Koronkowa ), so I decided to order more bras online from the Rack Shack, which had more bras in stock I ordered the SF Gladzioch in both black (75J - Ewa Michalak » Sf Czarny Gładzioch (866) ) and caramel. I was a little nervous that they might be too small, as I later saw on Reddit that the SF bras run a bit smaller in the cup than the BMs, but they ended up fitting reasonably well. The gore tacks perfectly, and even though the cups are cut lower than most of my other bras, I don't get any quadboob. I've wore the SF Gladzioch in caramel all day today, and it's super comfortable, even when lying down. It's the best fitting (lightly) padded bra I own by far. I think the fact that the upper portion of the cup is stretchy fabric makes the fit of this bra more forgiving than other bras I've tried in this size range. A slight downside is that the padding/foam in the lower cup is very flexible, so it doesn't provide as much nipple concealment as my other padded bras.
A note about sizing: when I ordered from the Rack Shack was a 32J (UK sizing), but both the bras that arrived were both labelled 75J inside, much like the bra I purchased from my local boutique (labelled 32M US/75 J). I haven't ordered from any other boutiques yet, but when I checked out Levana Bratique's website, it looks like they listed 75J as being equivalent to a 34M US. I'm not sure why conversion from Ewa Michalak's sizing is different between the boutiques.