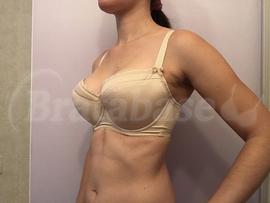 Holy shit I wrote out this entire review and when I went to hit save and have it post to the front page, it timed out and logged me out and I lost the whole review!! Well, here we go again lol. Hopefully I can remember everything I wrote.

Well folks, I think I can finally review this bra, despite having not worn it very much at all (for reasons which will become clear soon). I've been hyping it up enough that you deserve to know all the weirdness that is going on lol.

My boobs: ~26FF/G, narrow and tall roots, even to FOT, enough space between my breasts to comfortably wear taller gores.

I got my first Basic in 2018 in 55J with no alterations, and it has been an absolute staple in my wardrobe since then and fits me nearly perfectly (and I love the shape it gives under clothing). My only slight qualms with it have been that with certain outfits, the cups are a little tall (mostly with tank tops), and the straps/armpit show out the side of some sleeveless shirts. So, when I decided to order a backup, I requested for the cups to be reduced by 1cm, and straps to be moved in 1cm. Well, the upper section of the cups were definitely reduced, but with that came an unexpected consequence. I had explicitly not asked for any gore alteration, because I figured it would come as the standard height, which I would've been fine with. But when the cups were reduced, they also rotated the cups outward slightly (imagine the central apex of the cups as the axis), which created a more straight-necklined, balconette shape. Because of this, the gore was inexplicably HEIGHTENED, and the wings were slightly reduced. I checked against my OG Basic, and the wires seem to be the same between both models except for this rotation. Another consequence of this is that despite me asking for the straps to be moved in by 1cm, they are actually positioned wider than my OG Basic. I took a ton of photos comparing this Basic with my OG Basic, which you can see if you come to the full review page. In a lot of these photos, I lined up the wires so you can easily see the difference in gore/bridge height, cup height, wing height, and strap placement. It's really quite fascinating from a patterning/sewing perspective, but as a customer it's really quite annoying lol. Moving forward, it seems clear to me that if you want to maintain the original plunge shape of the bra, you need to request a reduced gore along with the reduced cups to keep the same angle of the neckline.

Practically speaking, because of the change in neckline, this bra is more open on top and gives me more cakes on a plate style cleavage. It also doesn't have as much coverage as my OG Basic, and makes me feel more jiggly and less supported, as if my boobs are sitting on top of a shelf lol. It gives me a pretty pointed, projected shape, which isn't my favourite (or at least certainly not the shape I aimed to get from this particular bra for its particular purpose). Because of all these oddities, I've barely worn this bra since I got it, which means the cups are still rather stiff, as it hasn't gotten a chance to soften up yet from wash and wear. This further discourages me from wearing it, so it's just an unfortunate cycle lol. Despite all this, I won't be emailing Comexim about it, because it took about a month to ship to me in Canada, and that was back in mid-January, so I'm just gonna hold onto it until I get too annoyed to keep it, or I actually start getting some use out of it when I need to wear my light coloured bras more often with my summer wardrobe. Hope y'all enjoyed this (IMO) wild ride lmao

TL;DR: If you want to maintain the plunge shape, you should probably request a reduced gore along with reduced cups.