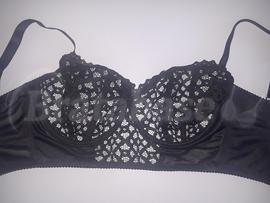 The band on this bra can easily stretch out to about 31". Although, this distorts the wires quite a bit. The most it will stretch without distortion or little distortion is about 29".
The cup depth can stretch to about 11".
It appears to be a really nice bra.
The gore came overlapped at the top.
The band is made of quite a stretchy material. Which makes sense, I'm sure they were worried about people being uncomfortable in a firm long line band.
I'd say the wires are a bit average width for this size with the cups running a bit small.
I'm sure most women on here would say it is a shallow bra, though I think it has a very good amount of projection for a half cup bra.
The lace the cups are made of are only a bit stretchy.
Story of this bra:
I moved in with a friend a few months ago and his very well endowed girlfriend was suffering in 34DDD/US (34E UK) Victoria's Secrets bras. So, I had to help her. She was more than happy and willing to accept the help, but wouldn't buy herself any bras. So, I purchased her a few. This was one of them.
I ordered this from Breakout Bras (through their Amazon store). They said it was in UK sizing but that their sizing ran differently, so to order two cup sizes larger than normal. I did this. I ordered a 30HH - I sized her into a 30GG. Though with a horizontal perimeter of 12-13 inches, I am sure she will quickly grow out of the 30GGs I got her.
She can't quite comfortably wear this bra because the edge of the long line goes down to her skeletal waist and her skeletal waist is quite a bit larger than her under bust. The wires seem to be a an decent fit and the gore seems alright as well. There is some collapsing at the bottom of the cup.
She is quite close set, average-narrow roots, petite frame (5'2"), and very full all over (quite round). Unsupported she appears a bit splayed and pendulous (which originally made her think she was wide set).