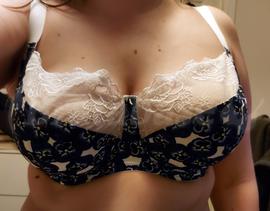 Right so this bra along with the Bravissimo Allie is supposed to have "new and improved" wires in J+ cups. They're supposedly more narrow and longer than their other wires. I didn't find the wire to feel any longer or anything like that, it doesn't go very high up under the arm like a lot can do. It does have a high gore though.

The width is fine, it's average, it reminds me of some Panache or Cleo bras but it's a step up from the other bras I've tried before, like Alana.

Anyway so basic balconette style, has fully adjustable straps that are soft and stretchy. The band is TTS as usual, could need an extender to break it in but I could fasten it and breathe in it still lol.

The fit..
So I have a smaller boob and on that boob you can very noticeably see that it's very wrinkly. I get a smaller gap but still a gap on the other boob aswell.

It has really good projection however, not at the wire. I've included a picture where I can easily fit 2 fingers width between the underwire and my IMF, and it refuses to go up there. The gore does not tack on me.

When I first put it on I didn't find the shape too pointy but trying it again and taking pictures it definitely has a bit of an elf shoe shape, at least on my bigger boob. The smaller boob looks better shape from the side.

I also have a slight wrinkle in the side of the cup because there is extra fabric right near the wire, but I guess it's also because the wires are still slightly too wide for me.

Overall I guess this bra is not enough immediate projection and too tall in the cup, and probably 0.5-1 cup too big. But I will not try this in a smaller size. This is just going straight back https://d28qt14g3opchh.cloudfront.net/smileys/icon_razz.gif" alt=":P" />


The look of this bra.. It is ugly on the website and it is uglier in real life. It's probably the ugliest bra ever. The flower pattern looks great up close but, because they are on a stark white background, your eye first notice the white splotchy spaces that are in between the flowers, which looks super dumb! It's so so ugly. If there was no white and it was black or a different blue or maybe even a dark green or red, it would look better but even then, this pattern is just not..it. It's awful and I hate it.

The fabric is also meh. The Allie bra had that silky feeling like Elomi have a lot, but this one feels like a cheap scuba/swimsuit material, it's slightly scratchy even, not silky soft at all. It's also double lined, with a sort of mesh material on the inside, even the lace part is lined.

Big no on this one from me.


Also, this bra is definitely not the same bra that is already listed here, as "Penny Bra (LN449)" ? this has a full band, so different construction. I don't know why they didn't just change the name of this to something new when it's not even the same bra.