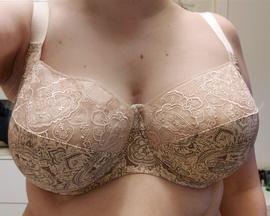 After trying Allie and having good experience I wanted to try Evie as it's also a full cup style. I messaged Bravissimo and they said this: "In regards to the Evie they are both a full cup and also have a side sling to give that forward facing shape so I think it would be good for you to try. You may notice a slightly different fit in the Evie due to the difference in wires and could try a size up in the cup."

They recommended I try 34K as I was wearing 34JJ in Allie. But because Allie is slightly wrinkling on me, I figured a 34K would be too big so I went with 34JJ. (Because I'm 34J-JJ generally).

It's not a very good fit. This has a completely different shape than Allie, it's not as projected at all. And this one is supposed to have the "old" wires, but tbh I did not feel a big difference in wire width or length between the two. Measurements might say another story tho, but at a first impression, not really.

This bra is much more "close to the chest" kind of minimizing type of bra almost. I looked pretty smushed from the side. I get slight quadboob in the top of the cup, and the gore floats pretty far out. I have significant wrinkling in the bottom of the cup and the same type of wrinkling near the strap, but I don't mind that there. But bottom cup no no.

It's not as bad as the Penny but it's very strange how three bras in the same size from the same company can fit so differently. Especially 2 that are full cup styles! We need consistency!

The band feels TTS like usual. It's a little more stretchy than Penny so I don't think I'd need an extender with this one.

As for the look of this bra, it's single lined, silky material in the cup, decently soft material in the band too. The lace is very pretty. Single lined. I don't really like paisley print but this is fine, it's boring but it's at least not mega ugly like Penny. It's inoffensive enough that I could wear this (if it had fit).

Center gore comfort:
Underwires dig into sternum, because they are too high
Center gore placement:
Doesn't lie flat against sternum
Bottom of the cup:
Can't quite fill it
Top of the cup:
Cuts into breast tissue (quad boob effect)
Cups separation:
Too separate for my boobs