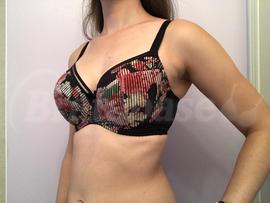 So, just about two weeks ago, I spent a couple days in Toronto. And y'all know what that means (for me, anyway)... bra shopping! I hit up my favourite store first, Broad Lingerie. They don't carry much in my size in stock, but this was truly a find (and deal!) of the century.

First of all, I never thought I would be a fan of the print until I saw it in person. The cups have a mostly pink, red, and green rose print, with slightly shiny black pinstripes running vertically. The cups also have a stretchy black elastic attached along the top edge, with very thin elastic fibers attaching it to the edge of the cup. From afar, it looks like the elastic is floating above the cup edge, creating a neat negative-space effect. It also helps the cups lie flat against my breasts, and not cut in. Other than the cups, the rest of the bra is black.

As for fit, it is pretty much perfect. The band is snug enough and stays in place on the loosest hook, the wires are a good width, the straps are spaced well for me, and the cups are basically the perfect volume. The only minor fit issue I get is that the gore doesn't quite tack on me, but I don't feel any less secure in this bra. In fact, I feel quite secure, well supported, and nicely shaped as well despite the bra being so light on my body. The only other qualms I have with this bra are 1. that there were a few loose threads when I bought it, but that's no big deal, and 2. the sides of the hook tape (ie. the top and bottom when worn; the sides perpendicular to the edge with the hooks poking out) seem to be sealed through some heat-treated method, basically melting the edges together instead of sewing those edges shut, which starts to get a little pokey after wearing it for several hours. I may try to either file these edges to smooth them a bit, or I may trim off those edges and sew them shut instead. That being said, I can absolutely live with these issues.

This bra gives me the same great shape that my other Comexims do, which is upfront, pulled in from the sides, and rounded with a light peak. Perfection for me.
The best part? It was on clearance for $20 CAD.