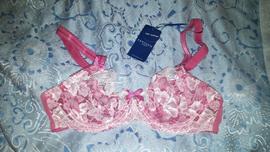 (Basically the long rant I posted on the front page, but edited to focus on mostly juts this bra.)

Well, I was reminded why I don't shop during Brastop clearance sales, especially if it's the ONE bra left in that size...

I purchased two beautiful Fantasie bras from Brastop on the "up to 80% off clearance!!" sale. (Side rant: are any of them actually that much off? I only find like 50-60% off, and even the one I got as the last bra was like 70% off... hmmmm) This one focuses on the side-support in 30D. It is comically flawed. (Laughably ridiculous fit!! I have always known where the term "quad-boob" came from, but I have never actually looked literally like four boobs... until now. Hence the comical flaw. Pictures coming soon.)

I would say that this is a 30C mislabeled, but they don't make 30C in this style! So by my the other flaws discovered, I believe this was just incorrectly constructed.

Across the 30D side support bras I viewed, they average at about a 4.8" cup width and a 7.7" cup depth. Mine is a 4.5" cup width and 7.5" cup depth! Wire length is also an entire inch shorter (7.5" compared to 8.7" average). Gore height is about three-quarters of an inch shorter (2.0" compared to 2.8"). Wing height, for whatever reason, is actually a half-inch taller. (Mine: 3.5". Average: 3.0") Band length, stretched band, and gore width is fine. So it appears the cradle was constructed correctly, but not the cups! How did this one end up with small cups AND a wire that's so tiny in comparison to the other 30Ds??? They don't do 30C, so I cannot fathom where that wire came from!

From a quality control standpoint, if you have less than a second to check on it, they both look beautiful, so I can see how they passed inspection. (Honestly, fabrics are achingly beautiful, tear-worthy that neither work.) Nothing was stitched incorrectly, and no backwards straps, weirdly stretched elastics, or snags in the fabrics. But how could one end up with such a tiny wire, and one with with wires intended for a two sizes up??

In summary: 30D is smaller than average, being painfully small. It sucks.