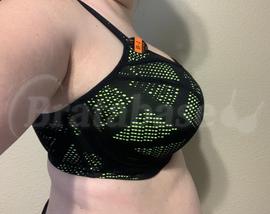 **NOTE: Apparently I’ve tried this exact bra before in the same size but a different colorway (and apparently forgot that I did), and it was not a good fit according to my review. I don’t know if it’s the difference of the colorways or if it maybe fits a little better because my breasts got bigger, but either way the lime/black colorway fit me a little better than the gray.**

This bra is nice, but I don’t know how it would fit because I couldn’t fasten the band. I tried to see how it would fit by placing my breasts in the cups without the back fastened, and it may have been okay, but definitely not a good fit for me.

I can’t really review on much of the mechanics of the bra since I couldn’t wear it.

UPDATE: I tried this on in the morning time rather than the end of the day, and I was able to get it clasped. I tried the band on upside-down and backwards and the band was the right tightness. The cups could probably be a smidge deeper, the gore doesn’t tack and the bra is very compressing, but I don’t spill out or anything. I also like my sports bras to be compressing? So this one I’m actually keeping after all!

Center gore placement:
Doesn't lie flat against sternum
Cups separation:
Too close together for my boobs
Band fit:
I can fasten it, but it feels too tight

On May 2021 View measurements

Center gore placement:
Doesn't lie flat against sternum
Band fit:
I can fasten it, but it feels too tight