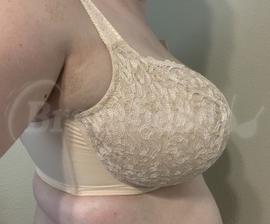 I think I wrote a review for this a while back when I first got the bra, but it got erased before I submit and I think out of frustration I gave up and didn’t re-write it lol.

I was told that the Kris Line Betty bra was Kris Line’s replacement for the Brilliant bra that was part of their permanent line but has since been discontinued. Compared to Brilliant, I much prefer Betty in these larger sizes. While the Brilliant fit me strangely (weird silhouette, oddly shaped, no support), the Betty gives the opposite effect.

This cut of the Betty obviously doesn’t has as much coverage, as seen by my photos. The bottom of the cups along the band have embroidery/embellishments, which for me is a negative because it cuts in and gets super uncomfortable throughout the day. The cups themselves are nice and deep and gives a great rounded shape. I would say it gives a look similar to that of the Kris Line Fortuna bra, including the coverage.

The straps are nice a thick and give great support. Easy to adjust, slightly wide but manageable.

Anyway, this is another great bra by Kris Line, and I’m surprised that I’m just now reviewing it, but like I said, the first time I reviewed it it got scrapped on accident. 😅

Weirdly enough the band is stretchy and I’d probably have to start at middle hooks. Usually 75 is too tight for me!