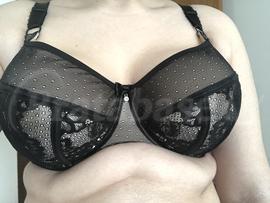 I actually got this bra as a birthday present to myself, and what a great gift! This is for sure my new favorite bra, and I can say 100% now that EM SF is my favorite style of bra. This bra is so narrow, so projected, with such comfortable, sturdy material and such a wonderful, thick band. I definitely felt like a bra model walking around in it today--which, might I note, not an OUNCE of notable boob drop. This might be a bit idiosyncratic, but you know that feeling when you watch a video about proper bra fitting for the first time and see the model come out in a properly fitting bra and are kind of mesmerized? I felt like that looking at myself in the mirror today--this is such a close fit!

I measured the wire width of this bra as 5.5 inches (!!!), which is less than what I got for my 65H - Ewa Michalak » Sf Zenith (1410) , but the wire widths don't FEEL all that different to me, and they don't look different stacked on top of each other, so probably take that with a grain of salt (with reference to my shoddy bra measuring skills, lol). Still, the Moonlight Lace does the same thing as the Zenith wire-wise--it's good for about an inch and then is too u-shaped for the bottom of my boob.

I have some strap gap, which is to be expected with me, and my bigger side does, very occassionally, strain a bit against the top of the cup, but it's really not noticeable unless you're posing in front of the mirror or observing yourself very closely like I was.

The gore tacks nicely--not /as/ sharp of a tack as some of my Cleos, for instance, but sometimes, a really hard tack like that can be a bit uncomfortable. I love the little jewel on the gore. So cute! In general, though, I didn't find this bra as pretty on me as on the EM models, and I think that has to do with the undertones of my skin not quite matching the undertones of the (shade of) flesh-colored parts of the bra. I also think the strap detailing looks kind of weird on my back and shoulders whereas I don't with the models. Couldn't tell you why!

Speaking of the band, there's not a ton of lace under the front of the band, but what is there does roll up and scratch agaisnt my skin. I can also definitely feel the lace on the back of the band--it doesn't itch but just presents a noticeable contrast. Also, while there isn't /noticeable/ boob drop with this bra, there's surely some, as while I can push this bra up into my IMF (!!!), it moves away from that space, as when I do that, I can feel the front of the bra really firm against my ribs. It doesn't hurt, but is just a bit of an interesting feeling because I don't think I've ever gotten a bra to sit there before, even if just for a minute or two.

I spent ~$80 on this bra, and while I don't have a solid answer as to whether or not I think it's worth it, I definitely lean closer to yes.