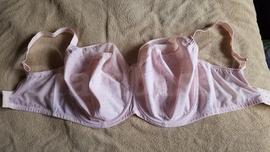 Week 1
This Annie in blush pink is the second colorway released by Bravissimo for this bra, the initial color being navy. Annie is an underwired balconette, is unpadded and is unlined in all sizes. Annie is related to the Penny that was released a few months earlier and they both use Bravissimo's new wires for J cups and above.
After unpacking this bra, I immediately noticed the wire shape, which was much more of a U shape than any of their previous wires. Before trying it on, I compared the wires to my existing bras, starting with my current fav, the Selina Lace and then with a 40K Satine that I ordered at the same time as this Annie. I found the comparison to be hilarious and have posted photos of the comparison here on Bratabase. I had no previous experience with Satine but ordered it when Bravissimo extended the size range up to K cups. I laid the 40L Annie inside the 40K Satine, with the wings folded in underneath to facilitate a comparison of the outside wires, with the gores centered on each bra. The wires on the Satine were 3 inches wider than the Annie! Both were unworn so the wires were the original shape. Perhaps the Satine is designed for those looking for a wide and shallower fit. I subsequently compared the Annie to my Selina Lace and also to one of my many Alana's and in both cases the Annie wires were 1 to 1.5 inches narrower, with the Alana being a little closer in width.
I absolutely love the blush pink of my Selina Lace and was equally thrilled with this Annie. The metal pieces where the straps connect to the wings, as well as the hook and eye closure, have a nickel finish to them that are quite exquisite. The gore has a nice mini star adornment that is black and is a nice contrast to the blush pink. The wings have the same star pattern as the lower cup. The band is quite comfortable and I was surprised that these new, narrow wires were virtually unnoticeable to me. In fact I rarely notice the wires in any of my Bravissimo bras whereas I noticed and eventually hated the wires in every single Panache bra I have ever worn. Same with Elomi.
Bravissimo recommends sizing down if you are a J cup and above but I chose to ignore that advice as my other 40L bras tend to be just ever so slightly small. This Annie was just slightly too big in the cups but it was not a deal breaker for me. To my eyes, I looked smaller, both from the front and from the side in comparison to my Alana's. So far, the Annie seems to give me a more rounded look, which is certainly a plus and although I seemed to get the weird shape that reviewers were warning about on the Bravissimo site, that weirdness seemed to be go away as the bra stretched out. On me, that weirdness was a cakes on a plate look that seemed to start an inch or two further out than you would expect but as I said, it appears to diminish over time. From the side, and aside from the weirdness I have described, the cups seem fairly normal but when I put my hands underneath the cups, the amount of projection seems to be far greater than my other bras. I found myself wondering why I wasn't seeing a torpedo shape, as some reviews on Bravissimo have described.
On the straps off the shoulder test, I was much more likely to spill out of the cups with Annie. This may be the result of having narrower wires but I would find this acceptable as I really do like the narrow, upfront shape I get. In fact, my shape is narrower and more upfront than any of my other bras.
I give this bra 5 stars as it ticks all the boxes for me. The one thing I dislike are the embroidered stars on the upper cups which are visible even under a medium thick top but this is not a big issue for me. I find nipple and areola coverage to be better than Alana and comparable to my Selina's which are lined.

Annie is now my new fav and I am looking forward to other Bravissimo bras that utilize these new wires. THANK YOU BRAVISSIMO!

Week 2
This may be my imagination playing tricks on me but my boobs feel lighter in Annie than in any of my other bras. I feel very secure in this bra and hardly notice either the wires or the straps throughout the day. I wore one of my newer Alana's 2 days ago and the Annie yesterday and the difference was certainly noticeable. It was almost as if I had lost a pound or two from each boob! As I said earlier in this review, my boobs seem to be more up front in the Annie than any of my Alana's and I must emphasize that the Alana's were the most up front bras I ever had. Very pleased with this Annie and I can't wait for the 38L I have on order.

Week 3
Before putting the Annie on today, I realized that I had not compared the wires to the 40L Gemma I got on a separate order. From what I understand, both the Annie and Gemma use the same wires for J-cups and above and I can confirm that after laying the Annie on top of the Gemma, the wires have essentially the same dimensions. I was somewhat surprised to confirm this as the fit of each bra is vastly different from each other. Read my 40L Gemma review for that side of the story.
After my 3rd week of ownership of the 40L Annie, this is, by far, the best bra I have ever had. If I had to choose a bra as my forever bra, Annie would be it, and it would not be close. Sorry Alana...

Jun 2021
There have been many complaints directed at the the tendency for the straps of the Annie to fold over both here on BTB and on Bravissimo's Annie web page. I experience a very slight amount of folding but it is no where near as bad as my lilac/lemon Alana, not even close. Perhaps I am in the Annie sweet spot where the weight of my boobs does not tax the straps as much.
When I view my side profile unclothed, I want to think I look smaller than my Alana's but when I wear a clingy top, I look substantially bigger! I think this is due to the narrow wires providing the same depth as Alana but that depth has been moved 1-2 inches further from my side since the wires do not go as far back. My bra on breast perimeter confirms this as I measure 1-1/2 inches larger with Annie than Alana.

The band and cup are slightly too big, feels more like a 40LL.