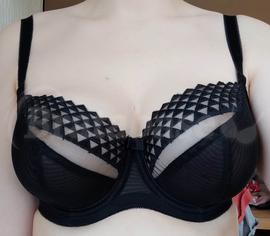 First thoughts: It doesn't fit and it ISN'T the Marcie https://d28qt14g3opchh.cloudfront.net/smileys/icon_sad.gif" alt=":(" /> after some thinking, this was a size too small so I don't know if it's actually a better fit in a better size.
TLDR: It was the wrong size for me at the time so obviously too small, but even in a more appropriate size the wires are really stiff and the cup depth doesn't feel the same.

Cups seem to small?? Band is too tight?? Gore too wide??
The Cleo Marcie will always fit me and now that Panache is discontinuing it and trying to replace it with the Asher, I will be grieving the loss of the future colorways. I have a lot of emotions and thoughts about this bra.
The full measurements are next to this bra review once you click on the review. The measurements are fairly similar to the red 28FF Cleo Marcie I bought at Bravissimo a few years ago. The most significant differences are in the band and cup depth.

Before you read: my underbust was a 30 band (but i hadn't measured myself yet) when i tried this on so it was technically too small, wich is why it was so tight. The band was still shorter than average though.
FIT: Without an extender, this is a poor fit. I measured the band to be 58.5cm and the stretched band to 63.5cm (it stretches 5cm), which means the band is shorter than other bras in this size that I own, which means it's on the lower end of the average stretch for the bras i own. This still makes it tighter than average for Panache, and then the cups are also too small/not deep enough. I can't comfortably wear this for any given time as is. Once i add an extender to the last row of hooks and then clasp it on the middle row of extender hooks, I can comfortably wear it. The cups are still too small and I get quadboob, but it's not as bad, and it isn't painful or difficult to breathe comfortably in. With the extender placed comfortably, I'm essentially lengthening the band by about 3 cm - which would make the band 61.5cm long, and then allow it to stretch past 63.5cm. I measured myself in order to set the fit for this bra, and my Super Tight is 64.5cm. So as is, this bra is tighter than my Super Tight measurement which means it isn't comfortable.

STRUCTURE/COMPARISON: The cup depth and shape isn't quite the same. The seams are effectively the same as the Marcie and so the overall structure is very similar. The straps are wider than average for Cleo bras which I don't mind aesthetically, but I feel like they could slide off my shoulders more easily. The gore is wider, just a little bit. What I've noticed the most after trying a 28FF and a 30GG is that the wires feel really solid and stiff, more so than other Cleo bras I have. The 28FF obviously wasn't comfortable because cups and band were too small, but the 30GG still isn't that comfortable because it feels like the wires don't sit on my chest, but hover in the middle by the gore. this could be because both the wires and the cups are too big. The stiff wires definitely don't contribute to an amazing fit.


DESIGN: The visual design is good, it's a pretty bra. I miss the polka dots from the Marcie to be honest. I don't like the square bow, which only pulls the attention more to the wide gore and wire channels. It feels and looks like a solid structure, like you'll really feel it when you wear it. The wire channels seem wider.
All the seams are well made and sturdy, I don't feel like this bra is goign to come apart any time soon! The black color is a little boring for me personally, but it's preferable over beige. My clothes and bras all tend to be very colorful so a black bra is a little bit of a contrast. It's got non-stretchy power mesh in the cup and between the wing and wire channels, and the wing is made of elastic power mesh. The edges of the band and straps have the typical loop decoration.

Center gore placement:
Doesn't lie flat against sternum
Top of the cup:
Cuts into breast tissue (quad boob effect)
Cups separation:
Too separate for my boobs
Band fit:
I can fasten it, but it feels too tight